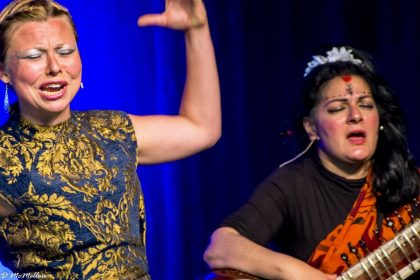 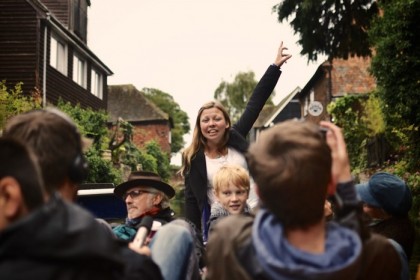 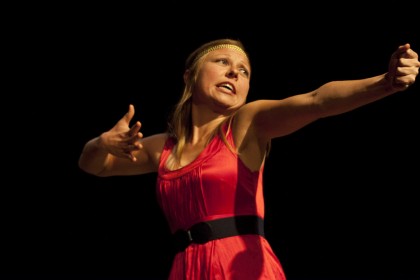 EMILY HENNESSEY is a bold and dynamic performance storyteller who tells myths, epics, folktales and wondertales from across the world.

She came to storytelling while studying Drama & Theatre Studies at the University of Kent where she met storyteller Dr Vayu Naidu. Emily completed a storytelling apprenticeship with Vayu and later trained with Ben Haggarty. Emily has also had the privilege of training with Indian Pandvani performer, Ritu Verma.

With a Swedish background, Emily has a particular passion for Norse mythology and Scandinavian folktales. Work and travels in India have also infused a great love of Hindu myth and epic.

Emily’s work is often described as intelligently composed and beautifully performed, while her storytelling style is said to be physical, powerful and often funny, captivating audiences of all ages.

Recent performances include the British Museum, Soho Theatre, Shakespeare’s Globe, Royal Opera House, Beyond the Border Storytelling Festival and Delhi Storytelling Festival. Emily has toured in India, Iceland and Japan and performed at venues and festivals across Europe. She is honoured to be a featured artist with the Crick Crack Club.

Emily is also a key member of the Pandvani108 ensemble.

Emily discovered the art of performance storytelling in 2001 when at the University of Kent. Here she met storyteller, Vayu Naidu. Vayu’s classes in storytelling were a huge inspiration for Emily. Having recently returned from working in Nepal, Emily took great delight in exploring stories from the Indian Subcontinent as well as folktales from Scandinavia, from where she hails.

Emily graduated in 2005 with a 1st class Master of Drama degree. She went on to work closely with Vayu Naidu, completing a storytelling apprenticeship and later working as Education Officer for Vayu Naidu Company.

More recently, Emily has trained with Ben Haggarty and is honoured to be an featured artist with the Crick Crack Club. Emily has also had the great privilege of training with Indian Pandvani performer, Ritu Verma.

Emily’s travels take her on adventures around the world. Emily has spent many months researching storytelling tradition and technique in rural India, from Pandvani in Chhattisgarh to Kathakali dance-drama in Kerala. As well as learning a beautiful way of life steeped in Tibetan Buddhist folktales in Ladakh (and becoming an expert in yak-herding), Emily worked at the extraordinary Kattaikkuttu School in Tamil Nadu, learning from the children who performed stories from the Mahabharata through music, dance and song from the age of 4.

Emily used to live and work in Kent. She now lives in Cumbria with her husband – storyteller and musician, Nick Hennessey.