We were delighted to get some fantastic reviews at recent shows in London and Brighton! Here they are…

“Kali is a wonderful piece of theatre – pure in its ideas and retelling a fantastic story vital for both Hindu and modern culture.”  ★★★★

Reviewed by: Alex Wood
Kali is the Hindu goddess of empowerment – mother to Ganesh, husband to Shiva. Her life is one of war, of love, and family – a grand, epic story with demons, catastrophe and a whole saga of creation. A tale so massive perhaps, that to even recount it all with any form of success seems like a huge challenge – one confronted by storyteller Emily Hennessey, and sitar player Sheema Mukherjee. The results, it must be said from the off, made for some exciting theatre.

A lot of this came down to the abilities of the performing duo. Hennessey, narrating the story alone for almost 100 minutes, laced the saga of Kali with humor, emotion and excitement, endearing the audience and keeping us captivated throughout. With understated precision she lyrically conjured up the lives and visions of Shiva, of Parvati and the pantheon of gods that surrounded them without missing a single beat, using subtle changes in stance, tone and bearing to switch between different figures with ease.

This was matched by the skills of Mukherjee – her compositions and performances not simply on the sitar but on a variety of other instruments embellishing the performance with a tonal depth and flavour. The music never felt overwrought or understated, but seemed to stride effortlessly alongside the narrative, reacting to events with crescendo or silence whenever necessary. 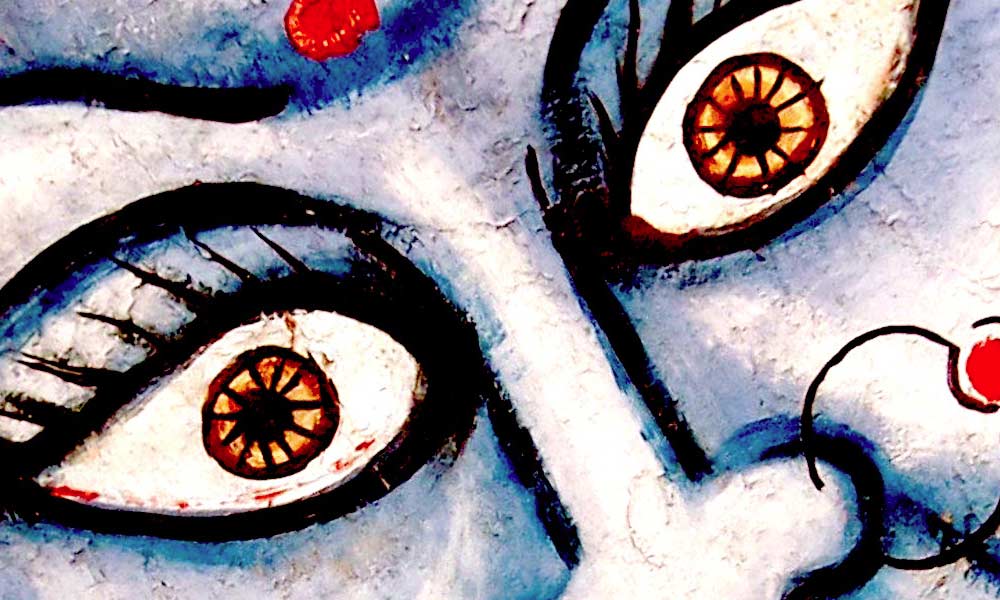 This was theatre by first principle – stripped back from technology wizardry (there were no lighting changes, or sound cues) and leaving only the rhetorical and musical skills of the performers naked before the spectator. There was a purity to proceedings – a didactic narration that gave the air of collusion and inclusivity. It was exhilarating to see such a performance brought to a central London venue.

If there were issues, it was less about fault and more around circumstance. As fantastic a venue the Soho Upstairs is for championing performances, it felt somewhat stifling at times, as if the performance needed an open space to breath and evoke even greater images. Hemming in the audience on three sides did make the performance feel somewhat static at times – a difficult issue to counter when only one performer had the means of moving freely, but this became less of a problem as the tale progressed and the narrative grew more evocative and physical.

Kali is a wonderful piece of theatre – pure in its ideas and retelling a fantastic story vital for both Hindu and modern culture. Kali’s tale is one of female empowerment, of joyful exuberance in the face of love, and seeing the two performers bring it to life so vividly makes it clear to see why it struck so many chords.

The goddess Kali is a complicated figure. She can be portrayed as a bloody-handed destroyer massacring armies and dancing on her husband’s chest. She can represent change and the force of time. She can be a wellspring of strength and creativity, or an aspect of the devoted mother-goddess Parvati. There is a fluidity to her character in common with the most ancient conceptions of the universe, where primordial forces exist in a constant state of flux.

Storyteller Emily Hennessey is an enthralling performer, infusing her tale with warmth and playfulness. Having travelled widely around India, her passion for the subcontinent’s history and culture is obvious. She sings melodiously in Hindi, and there are flashes of traditional Kathakali in the brief dances and dramatic postures she slips into throughout her performance. Embodying the eponymous goddess, she dances with eyes wide and tongue lolling, arms raised and feet stamping to the jingling of ankle bells, a devotional statue come to life.Multi-instrumentalist Sheema Mukherjee, best known for her contributions to world-fusion music outfit Transglobal Underground, provides a live score which goes well beyond a mere accompaniment. Her virtuosic sitar playing creates a resonant soundscape, but she sets the instrument aside in the story’s more reflective passages in favour of rhythmic handclaps and lyrical chants.

The production has had a long development, which shows in the fabulous precision and near-perfect synchronisation between the two artists. At no point does Hennessey have to strain her voice to be heard, and Mukherjee’s music never fades into the background. Instead, words and melody feel equally integral, equally involved in communicating the story, flowing together like two mingling rivers.

Hennessey’s composition evokes a vivid and deeply sensual world, redolent with details of perfumed meadows, oceans of milk, dappling sunlight, and billowing snow. Maybe it’s the humid environment of a small, full house after a hot day, or maybe it’s the faint perfume of burning incense, but there is a tangible magic in the air.

The story itself comes straight out of the complex, colourful melange of Hindu mythology – with a few contemporary tricks added to the telling. Hennessey knows just where to slip in a modernism or a daft joke, and treats the mythic subjects of her tale with the right mix of reverence and mischief. At one point, a god comments on his brother’s habit of disguising himself as various people and animals, telling him that the fact that he remains bright blue in whatever form he takes is ‘a bit of a giveaway.’

Other times, Hennessey calls on the audience for suggestions. Admittedly, these suggestions are for synonyms for orgasm, which leads to a sort of verbal re-enactment of that scene from the Naked Gun, with the dams bursting and the rockets launching into orbit.

There’s a sense of ritual running through the entire performance, established at the outset by Crick Crack organiser Ben Haggarty’s exuberant call and response introduction, and underpinned by the mantra-like quality of interwoven voice and music.

At the interval, we’re offered cut flowers, and invited at the show’s end to leave them at a small shrine by the door. There, your choice of idols promises a blessing for either a new beginning (via Ganesha) or empowerment (from Kali herself).

These spirits seem like fitting onlookers, watching over a joyfully told tale of transformations, transcendence and rebirth.

DAVE FARGNOLI is a contributor to Exeunt Magazine

“Emily is an outstanding performance storyteller” ★★★★★

Following performances in Denmark, Wales and at the Royal Opera House, Emily Hennessey brought her vibrant, enchanting story to a Brighton Storyteller’s event at the wonderfully bohemian Project Place in Baker Street. Emily is an outstanding performance storyteller, she does not learn her material off by heart or ‘recite’ a story, but improvises on the bare bones of a host of stories that have been meticulously researched over at least four years. She has travelled to India many times to share stories with Indian performance storytellers, temple goers and many people who have a love of Kali stories. She has also studied Indian dance, and wove in beautiful movements and mudras to her telling.

There are thousands of Kali stories and Emily made insightful, careful choices in cutting the cloth of her myth. The work is complex, as is the goddess herself. Kali is the Hindu Goddess of Death and Destruction, she has many manifestations such as the warrior who defends righteousness; the ultimate feminine godhead; and in a more gentle form, Parvati, devoted wife and mother. The evening began with the profound genesis story of how all beings were churned into existence using a mountain and a lake of milk; I was later intrigued to hear the shocking story of Sati, who sacrificed herself on the funeral pyre. The second half commenced with a wonderfully sensual and humorous story of Siva and Parvati’s amorous embraces being repeatedly thwarted by the demon king who heard a prophecy that he would be killed by the fruit of Parvati’s womb. Impressive work, her Norse myths are also outstanding. If you are interested in hearing more stories, Brighton Storytellers’ details are on Facebook. They host evenings on the last Monday of the month.

I’m thrilled to have received this year’s stipendium for the Swedish Women’s Educational Association! The aim is to share an aspect of Swedish culture in the UK. My project explores that magnificent creature, the Troll! Read more…

It’s a joy to be working on these Russian folktales, collected by Arthur Ransom (whose old Lake District house I can see from my home). Really looking forward to touring this new show this Winter. Read more…

A bit of an Epic moment captured on film by Thomas Radlwimmer at the fabulous Urban Storytelling Oasis in Zurich… (This moment was followed by a power cut and traffic chaos across the city!) Read more…